By 2024, the number of developers in the world will reach 28.7 million, a figure that will increase by 4.8 million compared to 2019. The growth rate is 6-8% per year and will remain the same until at least 2023, while the overwhelming majority of specialists will be in China.

According to the forecasts by the Bureau of Statistics of the Ministry of Labor of the USA, from 2019 to 2029 the employment of web developers and digital designers will grow by 8% in the country. This number is at least twice the growth rate for all other professions. Industry demand will continue to be driven by the popularity of mobile devices and e-commerce.

Indeed, Payscale, and Glassdoor provide dramatically different figures for the average salary of developers of different specializations and levels of employment in the US market. The amount ranges from $44 to $75k per year. Moreover, Statista data points to a direct relationship between pay and location. For example, an entry-level developer who works in the San Francisco Bay Area earns on average 44.79% more than his colleagues in Austin, Texas (USA). Also, major technology centers are New York and Washington DC. Here, the annual salary is at least 10% higher than the national average. 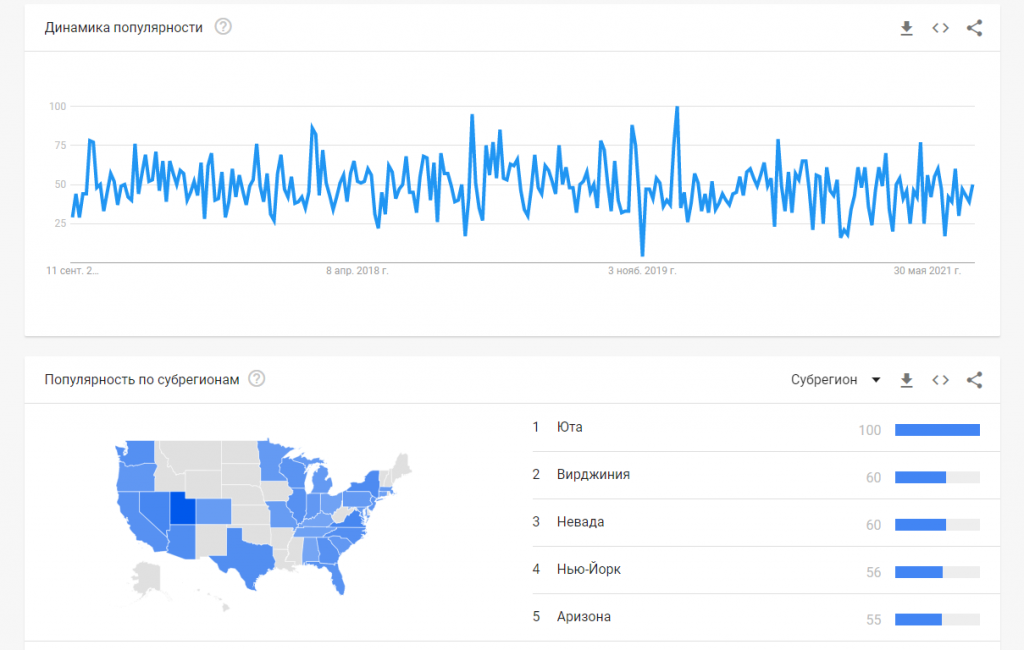 According to Google Trends, over the past five years (2016 – 2021) the popularity of the Web Developer Salary query has grown from 31 to 92 points. The peak was in June this year – 100 points worldwide. By the end of August, user interest had plummeted to 36.

Note that information about the specialty and salary level is often sought in the South Asian region. The top countries for the most frequent requests include Nepal (100), Pakistan (78), Bangladesh (72). The extremely popular queries on Google’s topic also relate to the full stack developer salaries in several variations. Users request information from India, the United States, and Canada. Search has grown by 850% since 2018.

The average entry-level web developer salary in the United States is $50,313 per year. Indeed, the amount is significantly different, as the base rate for such a specialist is $59,361. According to ZipRecruiter, L1 tier specialists receive $20.82 per hour, $833 per week, $3,608 per month.

The sector is highly competitive even among novice specialists, but there are real opportunities for career growth, depending on the level of qualifications, location, and experience.

ZipRecruiter has compiled the top five vacancies in the “entry-level web developers with above-average salaries” category: 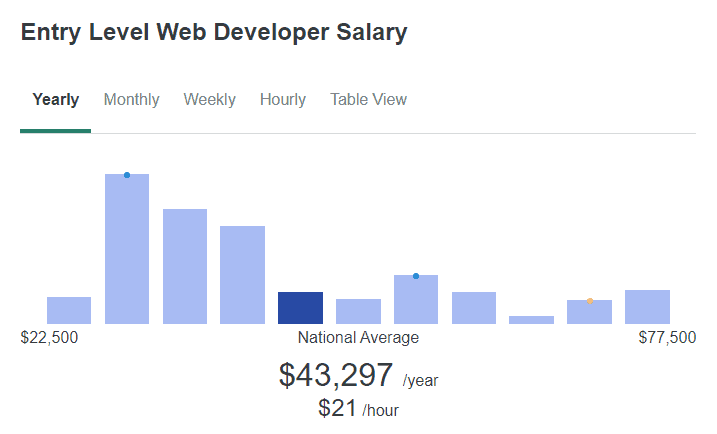 1 offers the best conditions and wages in Texas (USA). The number-one employer for entry-level web developers is 1000bulbs.com. Here, a novice specialist can count on an annual salary of $50,060 – $57,433. Among the applicants, the company has a rating of 3.0 out of 5.

According to Glassdoor, a junior web developer makes $49,304 a year. However, it is noteworthy that the amount is slightly less than the entry-level specialists discussed above.

The portal Indeed reports that the average salary in the US junior front-end developer is $61,330 per year. However, only 14% of specialists receive such an income.

The information from ZipRecruiter matches the data from Glassdoor. Workers in this sector earn an average of $50,200 or more. 18% of junior web developers earn below-average – $42,000 to $48,000 per year.

The following companies offer the highest wages in this category:

Below are 10 US cities where the typical junior web developer with no experience exceeds the national average.

According to Glassdoor, these professionals receive $78,731 a year. However, ZipRecruiter reported different figures – $81,484 a year and about $39.17 per hour.

The leaders among the most generous employers are the following companies:

The table below contains data on ten cities in which mid-level developers receive an order of magnitude higher than average. The most active job market is in California.

According to Indeed analytics, senior web developers in US companies earn $99,179 per year and receive $5,000 in annual bonus. On the portal ZipRecruiter, the average annual income is estimated at $104,827. 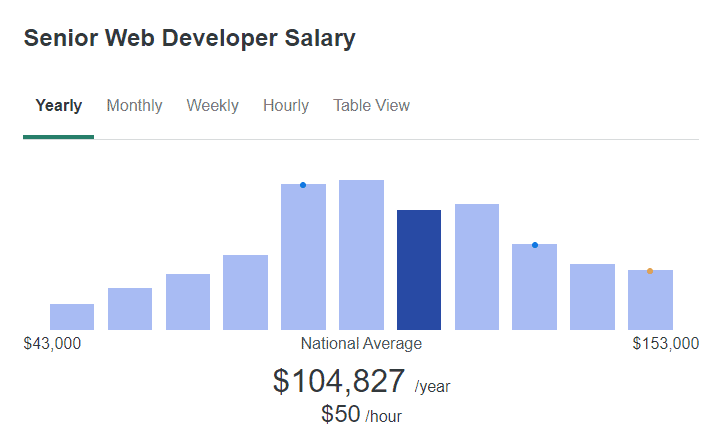 Professionals can also count on additional benefits from employers in the form of medical and dental insurance, unlimited paid leave, and the ability to work remotely partially.

The top 5 companies with the highest pay and comfort levels for senior web developers include:

The table below shows ten cities in which companies offer the highest salaries for senior professionals compared to the average income of similar web developers in the country.

Income depends not only on location and experience but also on specialization and scope of responsibilities.

Here is the data from several technological platforms:

Full-stack web developers who have been with the same company for a long time are often offered career advancements and pay increases. The actual salary also depends on the region in which the company is located. Startups tend to pay less. However, they may turn out to be more profitable in the medium term.

A high-level specialist must understand front-end and server-side technologies, work with code, and be proficient in programming languages ​​such as JavaScript, C ++, Ruby, HTML, and CSS. In addition, experience in creating beautiful, functional, and interactive front-end web applications is important. The higher the salary, the more requirements for the developer.

The highest salaries for full stacks are offered by:

Freelance developers who have proven themselves well in the market can count on an income of $72,208. The minimum salary for a self-employed specialist is $24,000 per year, and the maximum salary is $128,500 and above.

Freelance web developers charge an average of $35 to $60 per hour. The amount depends largely on the amount of work, hours, production, work experience, and position. A specialist should devote some of their time to self-promotion, actively maintain personal accounts in social networks, expand business contacts, and look for specialized communities.

Web developers find jobs on freelance platforms like Freelancer.com and Upwork.com. Performers post their portfolios, and employers select the developer with the most appropriate skills and experience. In this case, there are no geographic restrictions.

Orders are available on the Self Opportunity platform, for which they will pay $24 – $26 / hour.

Columbia University offers a freelance web developer job and pays anywhere from $40 to $43 per hour.

Newbies with an empty portfolio rarely get high bids. But often, the salary depends on the specialist’s ability to convince the customer of their skills.

Web developers create websites and applications from scratch. Software developers create software products for PCs, smartphones, and other devices. The first is to be proficient in programming languages to understand the basic business goals that will be achieved, particularly through the design of web pages. The latter is responsible for creating software that helps a business deliver services through applications, programs and extensions for computers.

What does salary depend on?

The average salary of a web developer in the United States is $105,861. How much does an entry-level, junior, and senior-level specialist get? The same as described above. Web developers are in high demand and are paid hourly. I often hire them to work remotely or freelance, giving the specialist additional flexibility and not limiting him geographically.

Which sectors are in demand

You can often find software developers in large companies and government organizations. Their work includes close collaboration with a team of programmers from other specialties. Therefore, the work schedule should coincide with the working hours of the entire team and management. A big plus of this is the normalized working hours and stable payments.

A web developer has more career and retraining opportunities, such as web design and user interface work. Experienced wizards can occupy the positions of senior web developers and software engineers.

The US Bureau of Labor Statistics predicts that job openings in the web development sector will grow by 13% by 2028. The reason for the dynamics is the growing popularity of e-commerce. As a result, even companies that do not sell directly over the Internet are looking to increase their online presence, including convenient mobile applications and extensions through a functional website.

What education is needed

A bachelor’s degree in computer science or mathematics is sufficient for a software developer. However, employers do not set high demands and rely more on the portfolio of a specialist. As a result, only 45% of specialists in the sector graduated with a bachelor’s degree; 22.7% – masters. And more than 23% successfully work in a niche without having a higher education.

Highly specialized web developers may need alternative educational programs – online courses in boot camp format. A certificate of passing them will be a plus for the employer. This will affect the salary level. General certificates of this format include:

The web development market continues to evolve, while the largest employers are concentrated in the USA, Canada, UK, China, and India. The top three include web developers in user experience design, server development for website functionality, and mobile application programming.

Pay standards differ depending on the employer’s location and the hired person, their skills and work experience. The format of employment also has an influence. For example, full-time work guarantees stability, and freelancers are not tied to a location and can choose projects with a higher one-time payment.

Developers need a specific set of skills and have a talent for concentrating on details and learning new and unique languages. The presence of deep practical knowledge can compensate for the lack of many years of work experience and lead a specialist to a highly paid position.