The responsive design has a range of advantages, and the most important ones are an improvement in search visibility and an increase in traffic. But will the time and money spent on the responsive layout of an online store pay off? Find out the answer in the case study by Lemarbet.

How was the Responsive Layout Implemented?

The customer was an online store selling repair parts for mobile phones and tablets. The creation of the responsive website took 7 days: 3 days to create the design of different versions and 4 days to make the layout and test how it displays. We made the responsive design for all screens with more than 320px resolution, so, actually almost for all existing mobile devices.

How was the Responsive Design Tested?

Of course, we tested the mobile layout on all devices of the developer’s team.

The responsive design was launched on August 15, 2015. In a week after that, the quality and quantity of transactions from mobile devices began to improve. In the screenshot, you can see the statistics of traffic and transactions on mobile devices. The comparison period: 1.5 months before the launch and 1.5 months after the launch of the responsive design.

Note: The statistics are filtered by mobile devices and organic search to make the analysis more precise.

The screenshot shows that mobile traffic grew by 30%. But the eCommerce indicators increased much more: the conversion rate grew by 42%, the number of transactions – by 86%, and the income – by 116%. We also compared the website data 6 months before the responsive layout launch and 6 months after it. 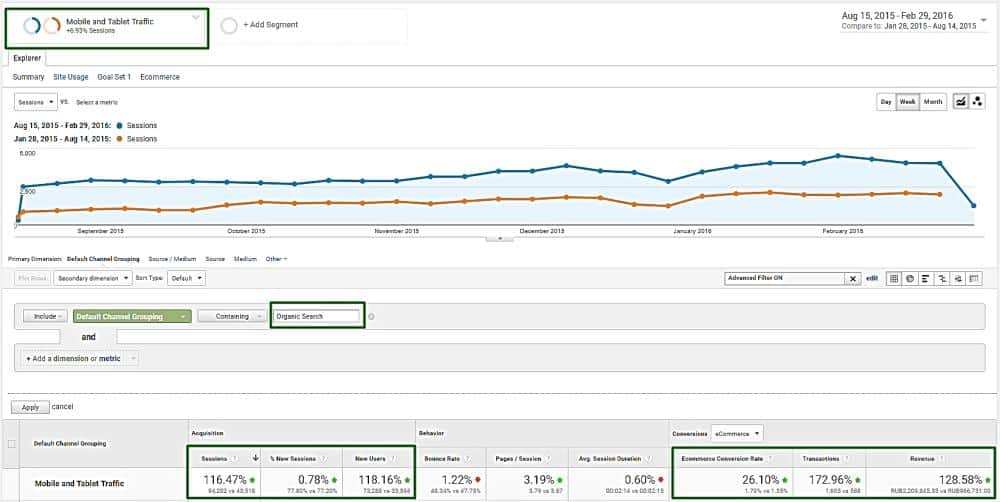 Maybe this result was influenced by Google’s Mobile-Friendly algorithm launched on April 21, 2015. The next screenshot shows the growth of the revenue from ecommerce. Already 1.5 months after the responsive layout implementation, the revenue increase was 119%.

Nevertheless, seasonality shouldn’t be praised for the traffic growth in September. The graph of search request volume by month proves that:

It is also interesting to compare how the traffic and conversions are distributed among gadgets: tablets, mobile devices, and desktops. Mobile devices account for the most noticeable increase in the transactions rate. Tablets take second place, and desktop devices take bronze. 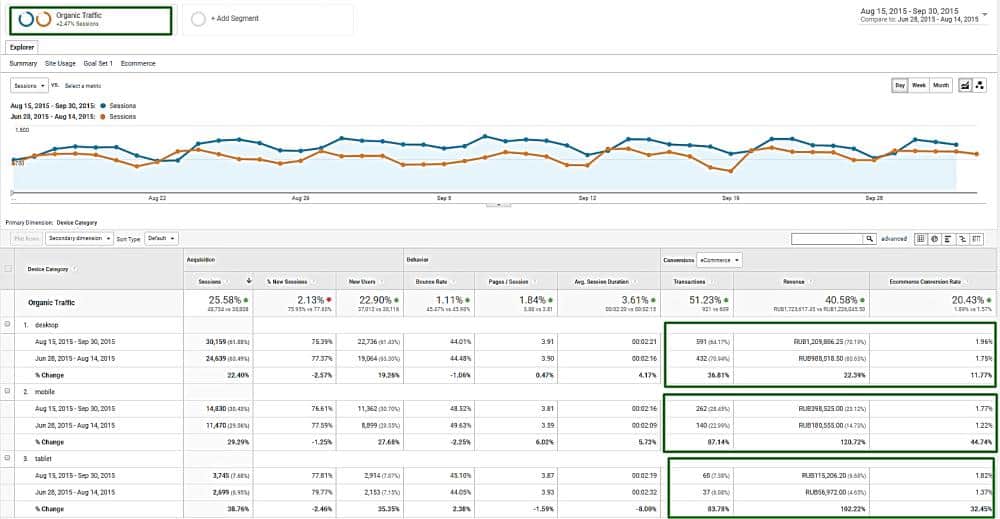 Actually, it’s logical. The website was already convenient to be used on tablets before the responsive layout launch. However, we are interested in another question: Isn’t the small growth of eCommerce indicators on desktops connected with the responsive design? It may be connected. How? Through assisted conversions. So potential customers come to the website from mobile search, browse the page, and if they like it later, they will visit your website again on PCs to continue the search (for example, to learn more about «iPhone microchip»). Unfortunately, the website wasn’t connected to the User ID function that would allow having updated information on the complete interaction of the users with the website. Yet, for most users who visit this website, a smartphone or a tablet is mainly a way to find information while the necessary transactions are done on PCs. The statistic below proves this. 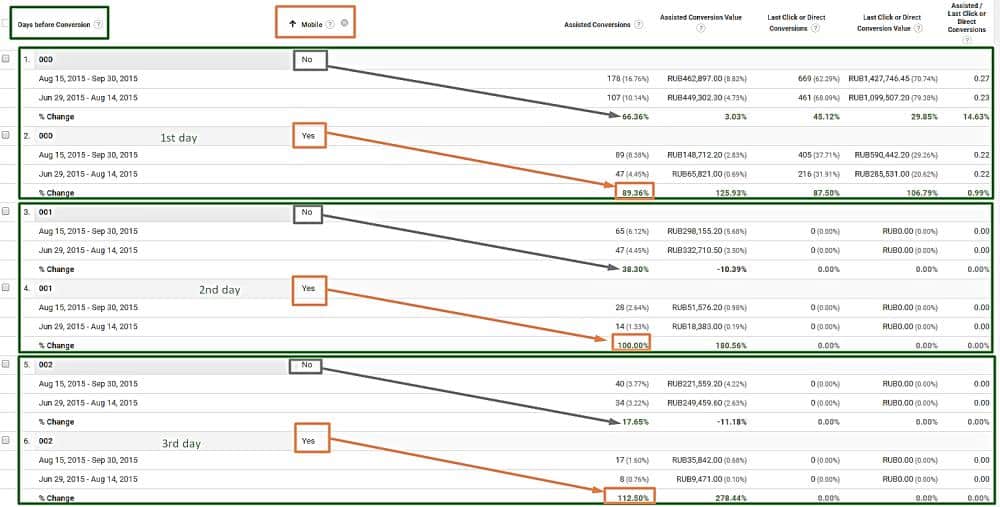 During the first 3-4 days before assisted conversions happen, mobile traffic is absolutely crucial. Potential customers should like the mobile responsive design, which will make them return and purchase. It is also interesting to check how the responsive layout influenced the number of transactions made by new and returning visitors.

After the responsive design launch, the conversion rate has significantly increased in both cases, although the new visits indicator is higher. Nevertheless, the absolute values ​​of the transactions rate for these user groups are quite logical: 1.4% for new users and 3% for returning. Now, we will slightly move from transactions and look at the behavior of the users who visited the website on mobile devices. The main indicators (the bounce rate, pages per session, and the average session duration) remained practically unchanged.

So how does it happen? Why has the responsive website become more convenient, but the behavioral factors haven’t changed? If to ponder this and analyze the actions of visitors, it is possible to draw some conclusions:

Assisted conversions are the last indicator you should pay attention to. The screenshot below shows the assisted transactions statistics before and after the responsive layout was launched. To make the analysis simple and clear, we included only free traffic channel data divided into mobile devices and desktops:

The rates of assisted conversions on mobile devices are 2-3 times higher than on desktops. Moreover, the growth is observed in all existing indicators: both for last-click conversions and direct interactions.